Want to hear more from the veterans at the heart of everything we do? By joining the Tommy Club you can view our exclusive new Champions Area. Every month we will share the stories of the brave men and women who risked their lives for our precious freedoms – available only to you, our growing community of Tommy Club Champions!

Paul served in the Royal Marines from 1995 – 2017, his 22 year service, which saw him deployed on 7 operational tours, he was discharged from the forces with Post Traumatic Stress Disorder and in need of a wheelchair.

Paul came to RBLI in 2017, struggling with his mental health and was placed on the charity’s holistic welfare programme, Step-In, which provided him with a plan towards an independent and fulfilling life. He said ‘ My mental health during my service in the Royal Marines affected me massively, the physical injuries I can see, but the scars that I can’t see, that other people can’t see are the mental side of things, the invisible scars. The nightmares, the only way to stop it, for me, was to have a drink’.

RBLI provided Paul with the professional physical, mental and addiction support that he needed as well as housing to support him while he continues on his journey of recovery. Since he first came to RBLI Paul has made huge progress, he has moved from assisted to independent living within our accommodation, has stayed sober and after several surgical procedures is now walking with the use of a cane.

Despite knowing he will live with PTSD for life, Paul now manages his condition by attending weekly support sessions at RBLI’s Village. Paul said ‘Without the help from the RBLI I don’t know where I’d be right now’.

Joan now 96, moved into Royal British Legion Industries’ assisted living accommodation Queen Elizabeth Court in 2015 after she had a fall which took place when she was chasing off a burglar at a time when her husband was in a home with dementia.

She joined the forces and became a leading aircraft woman in the RAF, serving from 1942 to 1946. “I’m sure people were celebrating and the pubs were full,” she says remembering VE Day. “My step-father was an engineer in the First World War. He was still having great trouble from having been gassed in the First World War. I just knew at the end of the second, he didn’t want any more war. People should consider themselves lucky living in times of peace.” 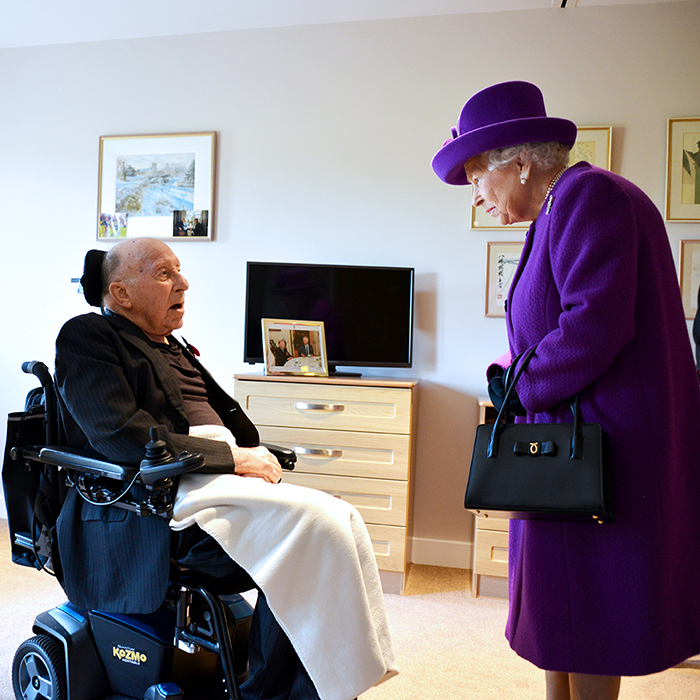 John, centenarian, joined the Army just before the outbreak of the Second World War in 1939. He served throughout the Middle East, rising to the rank of captain in the 1st Battalion Bedfordshire and Hertfordshire regiment and joined the Chindits – a special operations unit formed to fight behind enemy lines to protect India, then part of the British Empire, from Japanese invasion. John is believed to be one of the few remaining Chindits.

John has been living on RBLI’s Aylesford village, which provides homes and welfare to more than 300 veterans and their families, since 1956. After suffering a stroke in 2018, John moved to the charity’s high-dependency nursing home Gavin Astor House from its independent living accommodation Queen Elizabeth Court.

John was the first of 15 residents to move into the charity’s new £2m state-of-the-art care facility which was officially opened during November 2019 as part of the charity’s Centenary Year.

To hear more from our veterans, including their stories, join the Tommy Club. We will send you exclusive monthly content, curated by a leading military historian and professional film makers.